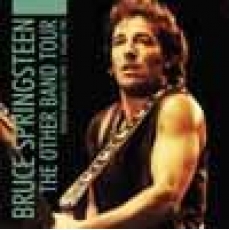 The Other Band Tour Vol. 2

The Bruce Springsteen 1992–1993 World Tour was a concert tour featuring Bruce Springsteen and a new backing band, that took place from mid-1992 to mid-1993.  It followed the simultaneous release of his albums Human Touch and Lucky Town earlier in 1992.   It was his first of four non-E Street Band tours.  Later, Springsteen had more non-E Street Band tours, the Ghost of Tom Joad Tour, the Seeger Sessions Tour, and the Devils & Dust Tour. The tour was not as commercially or critically successful as past tours, due to poor reception of Human Touch and Lucky Town as well as changes from previous tours. According to Springsteen biographer Dave Marsh, die-hard fans have informally referred to the backing band as "the Other Band" (and the tour as "The Other Band Tour").[1]

The tour was preceded by a June 5, 1992 U.S. "dress rehearsal" radio broadcast of the new band.  Springsteen said, "I missed playing. I missed getting out. I missed the fans. I've been home a while. I've worked hard on the records."[2]  The tour's first leg was conducted in arenas in Western Europe, opening on June 15, 1992 at the Globen in Stockholm.  Springsteen said, "It's nice to start the tour here. It's nice to be back among people who have always been hospitable."[2] After 15 dates there, including five at London's Wembley Arena, the tour came home to the United States.

There, the second leg began in late July with a then-record 11 consecutive dates in New Jersey's Meadowlands Arena.  It continued in arenas through the U.S. and Canada, for a total of 61 shows through mid-December.

Springsteen then took a three-month winter break, before starting up again in late March for the third leg, a longer stint in Western Europe that played 31 dates there, some in outdoor stadiums.  The tour proper ended on June 1, 1993 in Oslo's Valle Hovin.