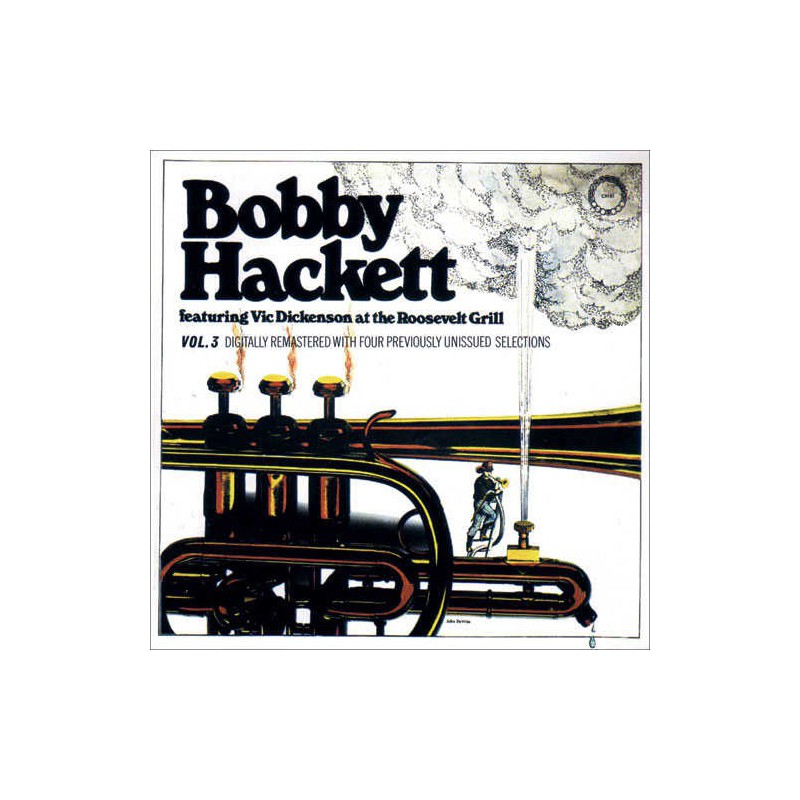 Nice clean vinyl with a smart cover still in shrink.

In 1977 -- the year following Bobby Hackett's death at the age of 61 -- producer Hank O'Neal's Chiaroscuro label released a third album of material from Hackett's triumphant 1970 engagement at the Roosevelt Grill in New York. Titled Bobby Hackett Featuring Vic Dickenson at the Roosevelt Grill, the LP was reissued in 1999 as the CD Live at the Roosevelt Grill, Vol. 3. This CD contains everything that was on the original LP, along with four previously unreleased bonus tracks: "Ain't Misbehavin'," "Muskrat Ramble," "Someday Sweetheart," and "I Ain't Gonna Give Nobody None o' This Jelly Roll." O'Neal had taped Hackett's Roosevelt performances extensively, so there was an abundance of material in the vaults. And it's a good thing that O'Neal had the wisdom to do so much taping, for the quintet that Hackett led at the Roosevelt was definitely among the finest groups he ever had. Joined by trombonist Vic Dickenson, pianist Dave McKenna, bassist Jack Lesberg, and drummer Cliff Leeman, the cornetist is in top form on such Dixieland staples as "Basin Street Blues" and "Way Down Yonder in New Orleans." This CD contains some new liner notes from O'Neal, along with his very cranky but honest liner notes from 1977, when he expressed his disgust with the many amateurish, straw hat-wearing charlatans who had been making a mockery of Dixieland and turning it into a parody of itself. O'Neal is quick to emphasize that Hackett, unlike such charlatans, played New Orleans-style jazz the way it was meant to be played -- with good taste, soul, and impeccable chops. Indeed, excellence is the rule on these swinging performances.